Now, we had enough so here is a public update so all of you know. We are having technical issues on the Blog and suddenly, the PHOTO UPLOAD post function is not working. Not loading. Not uploading any photos.

Sometimes, right before publishing an Article, strange technical disruption attack take place, as if these people who do this want us to “lose time and get stress level increase” and then “give up and not post over time”. How typical.

Michael prepared well. No worry. I am chilling in the sun and will continue this battle if you like it or not and Michael will get his Truth told. 😛

Have all a nice Day and enjoy this magical Summer 2014!

This would freeze everything, and one has to logout and login again. Still same issue. Over and over and over. Same style and tactics from these People since 2010.

Then, WordPress lets you go to some “Support Forum” where you can long and stressful lose time and discuss solutions, help, ask, but nobody feels responsible nor is there any respect for anyone´s Data online today in this “Internet Era”. But only because some evil people use the not yet established well internet-laws or lack of better, does not mean there is no law. There is a law and it does apply to the Internet as well. You are not allowed to break into someone´s house, nor rape them, nor take their ID and Passport, not any such things. Nor dress up as them and pretend in a public Interview their Data and such things.

Oh and btw, they removed before the last Weekend hundreds of Views rudely, and in our Faces, from our Youtube Videos, especially the MADE IN HEAVEN Cartoon aimed at. Here, check out what Michael´s jealousy, nasty enemies do:

5 Weeks later under TECHNICAL DISRUPTION ATTACKS on our Releases:

Hahahahahaha, in your face. No more being silent, back off of me and Michael´s Work, Hollywood…

I know all you did to Michael and how you spied on his Work for years and his Private Life, and how you would steal and steal Ideas he made up, not you, especially for the FILM PRODUCTIONS he always dreamed about and YOU discriminated against him and blocked his Film Career for years.

By what you do, the whole World will get to see the Truth, so thanks. You can´t upset me anymore, nor take my sleep. I am stronger now. You can´t harass me and kill me slowly as you did with Michael for years, or accuse me falsely as you did on him. Michael Jackson never did any of the things you accused him of, and he was only into Women and I can GUARANTEE the public that. It is time someone taught you a lesson, so you remember that other human beings have human rights, rights to their OWN WORK AND EFFORTS MADE BY THEM, not you, rights to speak their opinions or make art they feel like as they want, how they want, when they want, and you have no right to use, let us say, a song ANOTHER ARTIST MADE OF A PERSONAL LOVE AFFAIR, for yourself. There is moral laws, spiritual laws, and human laws. And even human laws, strictly forbid this jealousy crap.

Get your act together and back off, or you will get sued heavily, because we will protect and defend our big Projects we working on now. Not even a picture or word you will  be able to re-use or hack or spy on, is that clear?

“I’ve seen lawyers who don’t represent me and spokespeople who do not know me speaking for me.

These characters always seem to surface with dreadful allegations just as another project, an album, a video is being released.”

Have a nice Day, 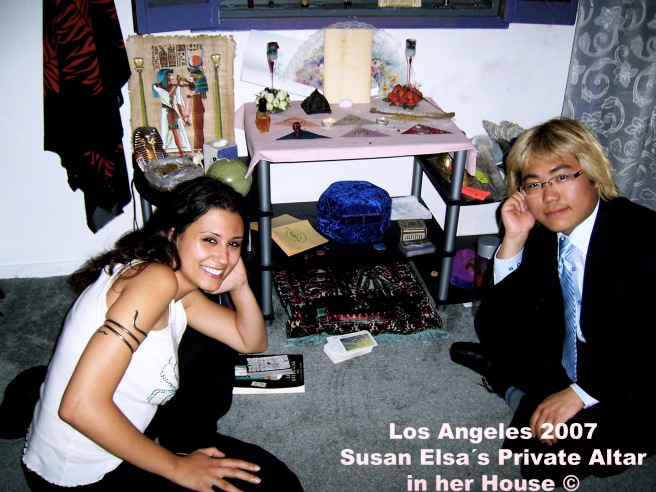 Susan Elsa in her House in Santa Monica at her Witch Altar doing a Reading for a Japanese Friend during a House Party.

Every Spiritually focused Person should have an “Altar”, a work corner, table with spiritual items, gem stones, symbols used, tarot cards or whatever you use, organised into one corner like here. This builds like a personal Gateway that keeps tuning in more and more, as you do your “Training”.

All you need is a simple table or any corner even on a night table or such, best in your bedroom, because this is where you sleep and therefore, access daily spiritual realms during sleep (astral travels etc.) This is why it is the best location in your house to be placed.

Anything has to be YOU. It has to be individual, and express your soul, what you go through, read on, study or think about. Meaning, if you have a thing for roses, red roses, then place red roses on it. If you like it on white table sheets, put a white one on. If you like golden candles, place golden candles there too. When you go shopping and things cross your way in a spiritual omen/synchronicity way, buy and place them there. The angels are guiding you, always.

Here is how my Altar back then was built-some core spiritual things:

1. Islamic Prayer Carpet used for years by my Psychic & Medium Grandmother, Bedur, given to me as a present before moving to LA.
2. Papyrus taken with me from Egypt, bought there years prior, coincidently displaying Osiris and Isis in the later form (originally, this was Hathor´s Head Crown, Twin of Horus- Son of IsIs and Osiris).
3. The Egyptian Tarot (being used in the Reading seen on Picture)
4. Chakra Pyramids for Reiki Sessions (made on Purpose for Michael back then for trying to help him heal with Reiki)
5. Reiki Symbols for Visual Focus.
6. The SPAIN FAN (original from Spain bought years back)
7. Ritual Robe hanging on left side in black & red (to be put around during Magic Rituals-charged with a Spell against Interferences & Black Magic Attacks during Rituals)

“My” Classic Car back then (I was just hosting it for friend), had a modern, high speed engine built in named “DEMON RACE ENGINE”. Michael looked into it once, lighting it in the dark with his phone. Michael loved it, btw, because of his Song “Speed Demon” and his passion for fast-driving Cars. I always hated fast driving, to be honest. But I´m a woman. *big smile* In fact, I had an almost accident once with a friend, after he had had a real accident 2 weeks prior only. Total damage to the car, no damage to my friend, luckily. I had warned him about a week before that accident, to DRIVE SLOWER. “Don´t speed, it is not a game, I am serious” I said to him over and over knowing he drives too fast a lot. He was so shocked after the accident, calling me, in shock and could then not talk to me, because my premonition and words shocked him, but he didn´t listen and said he should´ve. I think he learned a lot from this experience. Think about Michael Jackson´s Song…