This is a special time, after the Blue Supermoons and the Red Supermoon, and soon there will be toward the end of October another Supermoon again. It is a magical and healing time, on a planetary level.

Since we began the Spiritual Focus on “The Black Consciousness Rising: Osiris vs. Set”, things which were hidden and not talked about much prior are now fully visible and debated in public. That is all finally the “Inner African Consciousness” rising again, after it has been oppressed for so long.

It is Osiris /Ausar healing his People, and all of Humanity, bringing the Ancient Egyptian Spiritual Awakening and Wisdom to everyone now.

Please take a look back at the first article, the others following are titled “Dangerous Knowledge Series” and are focused on Michael Jackson´s Dangerous Album, research and inspirations, thoughts and messages beyond what has been explained ever to the public.

Now, we have talked often by now about the Osiris-mentality and spiritual mind-direction, and the Set-mentality and spiritual mind-“set” of Setians/Satanists. It has nothing finally to do with anything tangible or worldly, but is by now and the way we use it to teach a “universal dualistic symbolism” and when we speak, we speak always with focus on a broader scale, on the MASS CONSCIOUSNESS of Humanity.

You may also call it:

All that, is the same, just different ways of saying it.

In order to heal society/humanity as a whole, and unite people as one big human family, the MIND has to be focused on for a solution and real transformation. I said so in my 2010 Music clearly and openly already when singing:

“Back into your Minds, and I´ll show you the LIGHT OF MY MIND.

Listen to this Ritual Chant, I´m channeling from my Soul, I´m looking toward the Sun, starting the Egyptian Resurrection of “Music”. Tonight, I AM Light, I AM Love, I got the power in my hand, let me revive “Music”, worldwide, worldwide (Isis-Osiris-Horus-Amun Ra)” – © I REMEMBER Album by Susan Elsa Insights, 21st December 2010-

By now, everyone in Hollywood is stalking our artistic Projects, the Mind-Power-Magic messages and spiritual work and general work and information, and it is not surprising at all to find through these attacks the pathway to a “Temple of Set” located in Santa Barbara, linked with the Church of Satan and Hollywood in complex, but obvious ways. You can´t hide your “mind-set of war on twin flames and jealousy” any longer.

Now, obviously we cannot publish such heavy spiritual teachings and serious secret magic information just out in public- so some of the following special Thriller-Halloween Series Articles will be password protected for our serious Mystery Teachings students!

Note: Please make sure that when getting into reading and learning anything of this knowledge to first of all ALWAYS place “a bright Light around you and your mind” as protection from the shadow side, and make sure you are really ready and serious about EVOLUTION OF YOUR SOUL. You will have to face your full Mirror so to speak, when getting into Master Spiritual Knowledge like this.

Now, when we say “African Soul” we are not talking physical-superficial and do not mean “only African People” involved- but the Soul itself, that part of Human Knowledge, that History of Spiritual Power, that Beginning of Civilization and great Architecture- and finally, that “Womb of Human Beginnings”.

Once all Continents were one big connected land. I saw scientists talking about that recently in a documentary, but forgot the strange word they even have for it. Looking it up…

Pangaea or Pangea (/pænˈdʒiːə/[1]) was a supercontinent that existed during the late Paleozoic and early Mesozoic eras.[2] It assembled from earlier continental units approximately 300 million years ago, and it began to break apart about 175 million years ago.[3] In contrast to the present Earth and its distribution of continental mass, much of Pangaea was in the southern hemisphere and surrounded by a super ocean, Panthalassa. Pangaea was the last supercontinent to have existed and the first to be reconstructed by geologists. 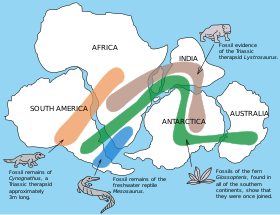 The distribution of fossils across the continents is one line of evidence pointing to the existence of Pangaea.

Fossil evidence for Pangaea includes the presence of similar and identical species on continents that are now great distances apart. For example, fossils of the therapsid Lystrosaurus have been found in South Africa, India and Antarctica, alongside members of the Glossopteris flora, whose distribution would have ranged from the polar circle to the equator if the continents had been in their present position; similarly, the freshwater reptile Mesosaurus has been found in only localized regions of the coasts of Brazil and West Africa.[18]

Additional evidence for Pangaea is found in the geology of adjacent continents, including matching geological trends between the eastern coast of South America and the western coast of Africa. The polar ice cap of the Carboniferous Period covered the southern end of Pangaea. Glacial deposits, specifically till, of the same age and structure are found on many separate continents which would have been together in the continent of Pangaea.[19]

Paleomagnetic study of apparent polar wandering paths also support the theory of a supercontinent. Geologists can determine the movement of continental plates by examining the orientation of magnetic minerals in rocks; when rocks are formed, they take on the magnetic properties of the Earth and indicate in which direction the poles lie relative to the rock. Since the magnetic poles drift about the rotational pole with a period of only a few thousand years, measurements from numerous lavas spanning several thousand years are averaged to give an apparent mean polar position. Samples of sedimentary rock and intrusive igneous rock have magnetic orientations that are typically an average of the “secular variation” in the orientation of magnetic north because their remanent magnetizations are not acquired instantaneously. Magnetic differences between sample groups whose age varies by millions of years is due to a combination of true polar wander and the drifting of continents. The true polar wander component is identical for all samples, and can be removed, leaving geologists with the portion of this motion that shows continental drift and can be used to help reconstruct earlier continental positions.[20]

The continuity of mountain chains provides further evidence for Pangaea. One example of this is the Appalachian Mountains chain which extends from the southeastern United States to the Caledonides of Ireland, Britain, Greenland, and Scandinavia.[21]

So, you see here in geological and scientific evidence as well, that on Earth and in Heaven, we are all ONE, and equal. Humanity finally “was born” in the location that is now named “Africa”. This is why to everyone the “African Soul Healing” should matter, because this is about remembering Humanity and True Human History and Spiritual Evolution.

This is a cool Video really, check it out:

Note: DO YOU SEE THE ARROW? SYMBOLIC OF THE DEVIL´S ATTACK (SET ATTACKING OSIRIS)!

THE POWER OF LOVE CAN RESURRECT THE TWIN SOUL © Copyrighted Information

When you think, in spiritual, symbolic and philosophical approach about the Pangaea (Pan & Gaia) Supercontinent Theory, and then compare to the symbols within the Osiris, Isis and Horus Legend, then what do you notice?

As described before in Articles here on this Blog, Archangel Michael and me are doing Planetary Healing Magic, meaning, we channel with God´s blessing Light from Heaven to Earth, building a “Twin Ray Bridge”.

“Hell all up in Hollywood, seeing that She´s Got It good, creeping from a dirty hole, tell them what somebody told!”– Michael Jackson´s Message to the Ghost of Jealousy (Set) © GHOSTS Movie & Soundtrack by Michael Jackson

The Maestra & The Maestro (Susan Elsa & Michael Jackson in Spirit) ©